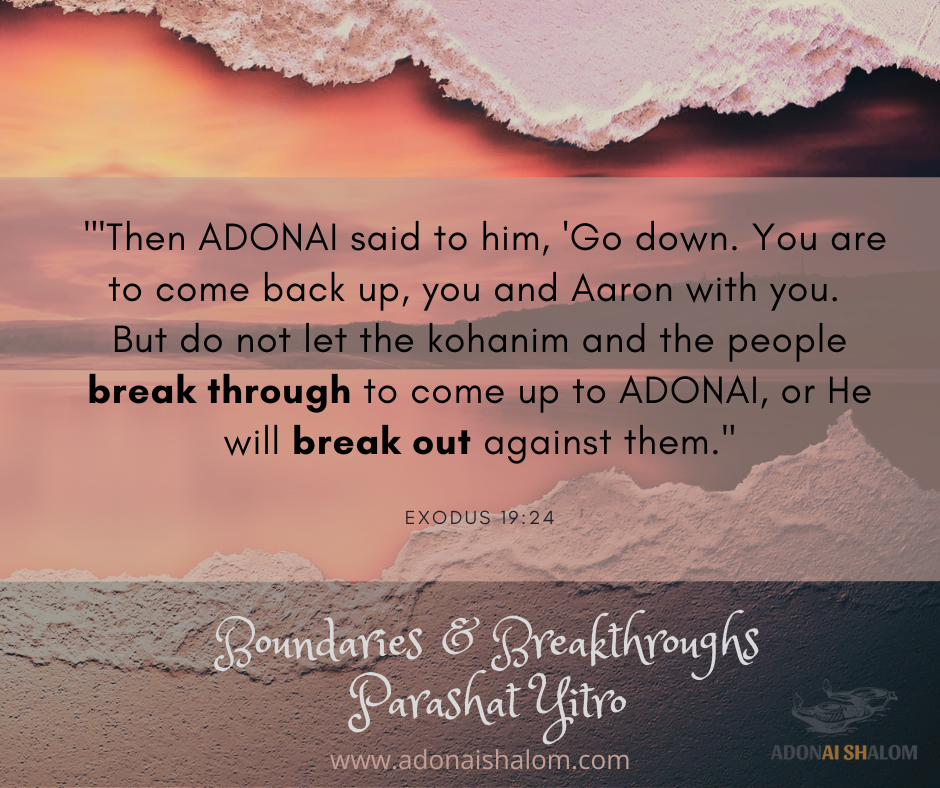 The boundary set at Mount Sinai

Shemot/Exodus 19 describes the awe-inspiring events at Mount Sinai leading up to the giving of the renowned Ten Words, or better known as the Ten Commandments in Exodus 20.

The holiness of Adonai, the Eternal One, is such that specific boundaries are given so that the people would not go up onto the mountain or even so much as touch its border. The consequence wasn’t minuscule: anyone who dared to touch the mountain in disobedience would be killed. Exodus 19:13, “Not a hand is to touch it, but he will surely be stoned or shot through. Whether it is an animal or a man, it will not live.”

This sounds harsh to our modern sensibilities, but this was not just any spectator event. The LORD God – YHWH Himself came down onto Mount Sinai, accompanied by thunderings, lightning, a thick cloud and smoke, fire, and an earthquake.

This was the real deal: real special effects far more emotive than any movie you’ve seen. The bottom line: The people could not handle this.

They needed an intermediary and Moshe (Moses) was the one chosen for the job.

The Almighty Creator came down onto Mount Sinai and called Moses up to meet with Him.

Exodus 19:21, “Then ADONAI said to Moses, “Go down and warn the people, lest they break through to see ADONAI, and many of them die.”

There is an interesting term: “break through.”  יֶהֶרְס֤וּ (transliteration: yehersu). The Hebrew root here is “haras” הָרַס, but what is interesting is that here in verse 21 and then again in verse 24, this verb appears as the intransitive verb (yehersu,) the only two occurrences in the Hebrew Scriptures. Perhaps it is a greater play on words in the English language than even in Hebrew, as what follows should surely grab the reader’s attention:

Exodus 19:24, “‘Then ADONAI said to him, ‘Go down. You are to come back up, you and Aaron with you. But do not let the kohanim and the people break through to come up to ADONAI, or He will break out against them.”

Many well-meaning devotional books and prayer leaders encourage believers to “pray for a breakthrough” or even “demand” that a spiritual door be opened unto them. These ideas are based off of Scripture, but can contribute to a proud, almost defiant attitude when not balanced with true rootedness in Scriptural teaching. Could this be the very attitude cautioned against in Exodus 19? A self-righteous posture can cause people to cross the line, risking quite the chastisement. The Lord God is Holy and His people must be made holy, brought near only by the blood of the Lamb.

Indeed, megachurch pastors and TV preachers have coined some phrases that have become extremely popular in Christian circles, but they are not all entirely Biblical:

3 popular Christian phrases that are not entirely Biblical

The “Prosperity Gospel” refers to the teaching and focus on the idea that if a person prays hard enough and gives enough of their money (tithe plus offerings) they will automatically be prospered with wealth. It is rooted in a very American mentality of material entitlement.

A righteous person will prosper by faith, but not in the materially-obsessed manner propagated by self-aggrandizing tv “evangelists” who egregiously spend millions of their victims’ dollars on private jets.

Might this be an example of how twisting truth breaks through what is right? How many famous people ultimately end up in shame?

Sometimes well-meaning people of faith will use this phrase to attempt to comfort someone in the face of tragedy. The Bible says you won’t be tempted by more than you can handle(1 Cor.10:13), but that is slightly different.

When I have served as a hospital and hospice chaplain, I have found it helpful at times to explain to fearful or grieving people that sometimes God actually does give you more than you can handle. You want to know why? Because then you have to depend on Him and “lean not upon your own understanding.”

The congregation at Mount Sinai didn’t lean upon their own understanding. They obeyed the word of God given through Moses and lived to tell about it.

3. “You need a spiritual breakthrough.”

This one truly seems harmless enough. In fact, it is partly true. Daniel prayed and fasted for 21 days and there was a “spiritual breakthrough:”

“Then [Gabriel] said to me, ‘Don’t be afraid, Daniel! For from the first day that you set your heart to understand and to humble yourself before your God, your words were heard. I have come because of your words. However, the prince of the kingdom of Persia resisted me for 21 days, but behold Michael, one of the chief princes, came to help me because I had been detained there with the kings of Persia.”

But notice, Daniel’s prayer influenced an outcome in the heavenly realms. In other words, he prayed a breakthrough prayer that benefitted heaven, rather than himself. His was a selfless prayer. The problem is, people get all excited and look to “make a breakthrough,” usually for their own plans or dreams. False preachers profit off of this emotionalism and encourage people to pray for their breakthrough, using quasi-Biblical allusions such as the widow persisting with the unjust judge in Luke 18 or Jacob’s insistence in Genesis 32 that he would not stop wrestling until he received a blessing.

The people were instructed not to come near, but they still had a role. They needed to be clean and part of creating a consecrated boundary around the mountain.

Exodus 19:23 “Moses said to ADONAI, ‘The people cannot come up to Mount Sinai, for You are the One who warned us, saying ‘Set boundaries around the mountain, and consecrate it.'”

Earlier in the chapter, ADONAI reveals to Moses that He intends for the people to be His own treasure from among all people! He also reveals that He wants them to be a kingdom of priests (kohanim) and a holy nation.

The people responded positively when Moses shared this news.

“All the people answered together and said, ‘Everything that ADONAI has spoken, we will do.'” Ex.19:8

They were later given ten specific boundaries – those commands that would shape their identity, the first one recognizing first and foremost that this God, the God of this people, the God of Israel, ADONAI, YHWH, He alone is God.

Moshe was a great leader. The Lord used him for so many mighty works, but there came someone even greater than Moses, the One who was and is and is to come, Yeshua ben Elohim:

Therefore, holy brothers and sisters, partners in a heavenly calling, take notice of Yeshua—the Emissary and Kohen Gadol we affirm. He was faithful to the One who appointed Him in His house—as was Moses also. For He has been considered worthy of more glory than Moses, even as the builder of the house has more honor than the house. For every house is built by someone, but the builder of all things is God. Now Moses surely was faithful in all God’s house as a servant, for a witness of things to be spoken later. But Messiah, as Son, is over God’s house—and we are His house, if we hold firm to our boldness and what we are proud to hope.

Yeshua’s death exemplified the reality that holiness and sin can’t mix when He took upon Himself the sin of the world. He took it all upon Himself so that He Himself could consecrate us, and we could now approach the throne of God without fear.

Hebrews 4:16 “Therefore let us draw near to the throne of grace with boldness, so that we may receive mercy and find grace for help in time of need.”

Never forget the majesty and awe that accompanies the holiness of our God. We must not approach Him casually! Yes, Yeshua is our Friend and our Brother, but He is also the Almighty God and King Forever, the Victorious One who conquered sin and death so that we might be saved from the wrath of God and come to His Holy Mountain.

May our response be like those awaiting Him at the base of the mountain: “Everything that ADONAI has spoken, we will do.”