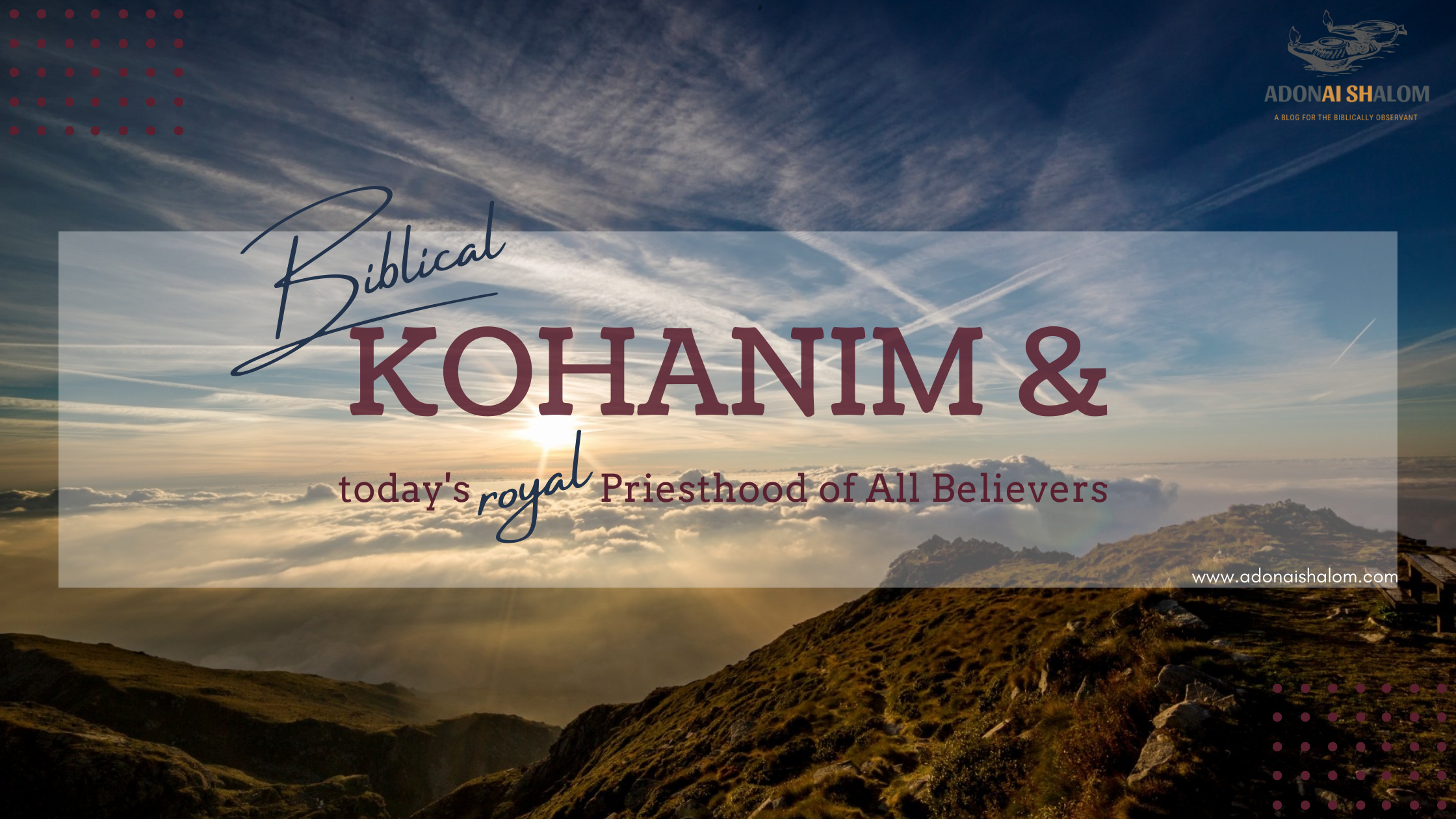 Hebrews 5:1 tells us “For every kohen gadol [high priest] taken from among men is appointed to act on behalf of people in matters relating to God, so that he may offer gifts and sacrifices for sins.”

This verse shows that every priest

The priest has garnered a level of favor making him “more worthy” than others to stand before the throne of the Most High.

We must realize that to be the appointee means there is an Appointer. In Torah, we see that the LORD Himself chooses who will serve as His priests. In the B’rit Chadasha (New Testament), the Eternal One reveals that His Son, Yeshua, (Jesus), is the Great High Priest for us, the divine and perfect kohen gadol.

While Aaron, Eleazar, and the other priests (kohanim) certainly did their best in their human capacity to serve this important role of standing between the people and God, they would never be “worthy enough” to completely save the people from their sin. Every year, on Yom Kippur, atonement would be made, but after that appointed hour, sin would continue to hold a grasp on the people and guilt would never be fully eradicated. The sacrificial system was in place to help cleanse an imperfect people of their sin, but a perfect sacrifice was needed: the perfect Lamb of God.

1 Peter 2 exhorts followers of Messiah Yeshua (Jesus) to understand that they are now part of the royal priesthood.

Yeshua (Jesus) came for us, served as our Great High Priest, died for us, and is resurrected in eternal new life and is seated at the right hand of God our Father. He lived on the earth in this way to teach us how to live. He served as High Priest not only to save us, but to empower us in our new roles as among the divinely-appointed priesthood. Peter describes our role as to be “pleasing” to God. We obey the LORD, not because we must or should, but because we love Him.

Now, let us consider what is truly remarkable!

From unworthy to made worthy

Formerly, we were all completely unworthy.

We could not be appointed to such a noble task as standing between earth and heaven in the Holy Place.

No sacrifice we would have offered could have ever been enough to earn forgiveness.

No gift, no gold, nothing on this earth could have served as a gift fine enough to present before the King of kings in exchange for His favor and forgiveness.

We were without hope. We were completely dependent upon the mercy of God and the obedience of an earthly priest.

Now, we are appointed as priests, and not just any old priest: we are priests of the royal lineage. We are princes and princesses, sons and daughters of the King of kings, and He delights that we serve Him. No longer does an earthly man stand between us and our Creator. We need only turn to Yeshua (Jesus), who makes intercession for us, and He Himself welcomes us, for He and the Father are One. (John 10:30).

It was revolutionary for our Lord Yeshua to say this. Every day, Jews would recite the Sh’ma, that the LORD our God, the LORD is One (Deut.6:4). So when He said, “I and the Father are One” in John 10:30, many eyes would have been opened to the Truth of His identity. Truly, this is the Son of God!

The vestments of YHVH’s priests were very specific. Today, when many people think of priests, they think of the Catholic or Mormon religion or pagan priesthoods. The fact that there are so many different religious groups that have their own priesthoods and priestly rituals shows that humanity in general understands its need for a priestly function, a moderator between us and the divine. Deep down, we know that we ourselves can do nothing and are in desperate need of a spiritual connection with the Holy One.

Unfortunately, everything outside of Scripture is errant, so we must look to what the Bible actually required and instituted. Roman Catholic priests, for example, base their apparel and actions on papal directives, not on Biblical mandate. One most obvious difference – Roman Catholics priests are famously not allowed to marry or have children, but Biblically, we know that Aaron the priest married Elisheba and had four sons.

Let’s look further at what the Bible describes as related to Biblical priesthood.

The priesthood garments of the Bible were made specifically to endow “splendor and beauty.” (Shemot/Exodus 28:2)

The garments were skillfully woven (Ex.28:8), made of finely twisted linen (Ex.28:6, 8), and crafted of the beautiful colors of gold, blue, purple, and scarlet (Ex.28:5, 6, 8). The colors are repeated and reflect the same color scheme used for the Tabernacle. Gold surely reminds us of the Glorious nature of HaShem. Blue was an incredibly expensive color sourced using exotic snails.

I recently saw a documentary that reminded me of this. In it, the presenter explained that the land of Phoenicia translates to the “land of purple,” as the people there were famous for their dyes. Did you know it took more than 20,000 snails to source the ink just to make one purple-dyed Roman toga! It was a costly process and not just anybody could afford purple or blue clothing and tapestries.

The Israelites were a people familiar with oppression and hardship. Can you imagine the self-esteem boost the LORD was giving them by instructing them to use the most expensive of products to prove their esteemed status as the chosen people?

The crimson red reminds us of course of the costly sacrifice Yeshua made, a reality foreshadowed by the tabernacle and priestly vestments and paid for in full on the cross of Calvary.

The priests wore a breastplate covered in precious jewels engraved with the names of the children of Israel (B’nei-Y’israel) (Ex.28:15ff). Notice that in Exodus 28:15, this is a breastplate of judgment. It is reasonable to say here judgment is synonymous with such an expression as discernment rather than a more punishing role.

Yeshua’s people are exhorted to use the full armor of God in Ephesians 6:10ff. Here, the breastplate of the royal priesthood of all believers is called the breastplate of righteousness (Eph.6:14). Good judgment can be termed “right-thinking,” “right-decision-making,” but that which makes us righteous is the shed blood of the Righteous One alone. The breastplate is intended as a protection for the heart – so discernment and judgment become tempered and perfected by the righteousness imputed to the saved ones.

Today, we wear the breastplate of righteousness and our feet present the Good News of peace. Scholars believe the Israelite priests entered barefoot into the Holy of Holies. We too, ought be bare of anything except the glorious message of salvation. The garments of the priesthood were intended to display splendor and beauty.

May your life be reflective of the splendor and beauty that is yours as a child of the Most High!

We’d love to hear your thoughts about the Biblical priesthood and the priesthood of all believers! Please leave a comment, like, and share with your friends!

2 thoughts on “Kohanim & the Priesthood of all Believers”