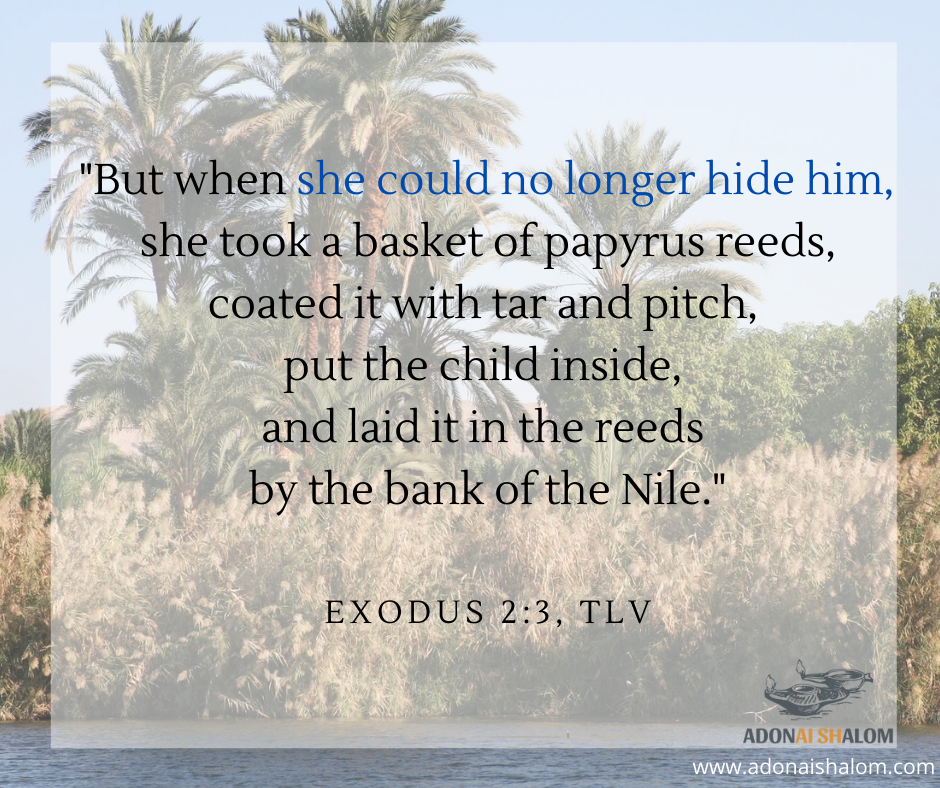 Amram & Yokheved, of the tribe of Levi

What is revealed in Exodus 2 is this special couple’s status alone. They are of the tribe of Levi, the priestly tribe. Scripture tells us a daughter of Levi is married to a son of Levi and they have a son.

Amram’s name in Hebrew means “Exalted Nation.” Yokheved’s name means “YHWH is Glory.” Their son would be a deliverer through whom the holy nation would indeed be exalted and the LORD’s Glory made known.

If we do not spend time in study of the Scriptures, we would not realize the richness hidden there. These two Levites in Exodus 2 appear nameless and nondescript, yet look how instrumental they were in Adonai’s plan!

As mentioned above, Yokheved had a son. Scripture describes the baby boy as “delightful!” The situation in Egypt was horrifically oppressive at that time, so due to the danger, Yokheved hid her son. She managed to hide the child for 3 months.

Ex.2:3 “But when she could no longer hide him, she took a basket of papyrus reeds, coated it with tar and pitch, put the child inside, and laid it in the reeds by the bank of the Nile.”

Yokheved was a wonderful mother. She did what she could to protect her baby and trusted in the LORD G-D of Israel as she placed the basket upon the Nile’s waters. And protect him, He did, for this would be no ordinary child: floating in that basket was Moses (Moshe), the one who would lead Israel out of Egypt.

The LORD uses the simplest of vessels – from a basket to a manger – to demonstrate to the world that His power is made perfect in raising up the lowly.

Truly, all that our Heavenly Father has done is marvelous, and always exceedingly above any expectation or level of understanding. He created you, and He did so with a purpose.

What is hidden within you?

What is it that you are hiding within you? Has the LORD placed a burden or a talent or a calling deep within you? If you pray and prepare, the time will come when your gift will no longer be able to be hidden!

Proverbs 18:16 “A man’s gift makes room for him, and leads him before great men.”

Though Moshe stuttered, the anointing upon his life made room for him even in the presence of the highest authority in the land, and Pharaoh had to cave in and let the people of Israel go. It was a temporary deliverance, but many years later, the Greater Deliverer would come.

And though there was no room in the Bethlehem inn, the Anointed One’s presence alone caused room to be made in the hearts of those who would seek and follow Him. When Messiah Yeshua (Jesus the Christ) came to this world, born in that lowly and humble setting, few understood He was the One who would reign eternally.

Revelation requires an element of hiddenness

Revelation is a key component of Scripture. In order for something to be revealed, it would have to first be hidden. It is a Scriptural principle, and Yeshua taught us:

Mark 4:22 “For there is nothing hidden that will not be revealed, nor anything kept secret except that it would come to light.”

There is a time and season for all things, and many of those things that were previously unknown or hidden to us have now come to light. Will you faithfully follow the One who has been revealed as Messiah of Israel, the Lamb who was slain, the Savior of all those who would believe, the King of all kings? Will you allow Him to use you, to shield you and to lift you up to impact the nations with the Good News of Messiah Yeshua (Jesus)?

How will you, like Yokheved, trust in the process and witness the LORD’s greatness revealed?

Moshe was of Levitical lineage, which was crucial to the unfolding of Biblical prophecies. If you have come to believe in Messiah Yeshua and have trusted Him with your salvation, you are of royal lineage, too.

1 Peter 2:9 “But you are a chosen people, a royal priesthood, a holy nation, a people for God’s own possession, so that you may proclaim the praises of the One who called you out of darkness into His marvelous light.”

Moses was hidden on purpose, for a purpose.

The LORD used him to lead the Israelites out of Egypt!

He made a way where there seemed to be no way, and He can do the same in your life, too.

May the LORD use you mightily and bless you on your journey!

Will you like and share this article with your friends? Would you please subscribe? We would love to continue publishing these messages to bless believers with the Good News of our Messiah Yeshua!

2 thoughts on “Hidden on purpose, for a purpose: Yokheved’s son, Moses”