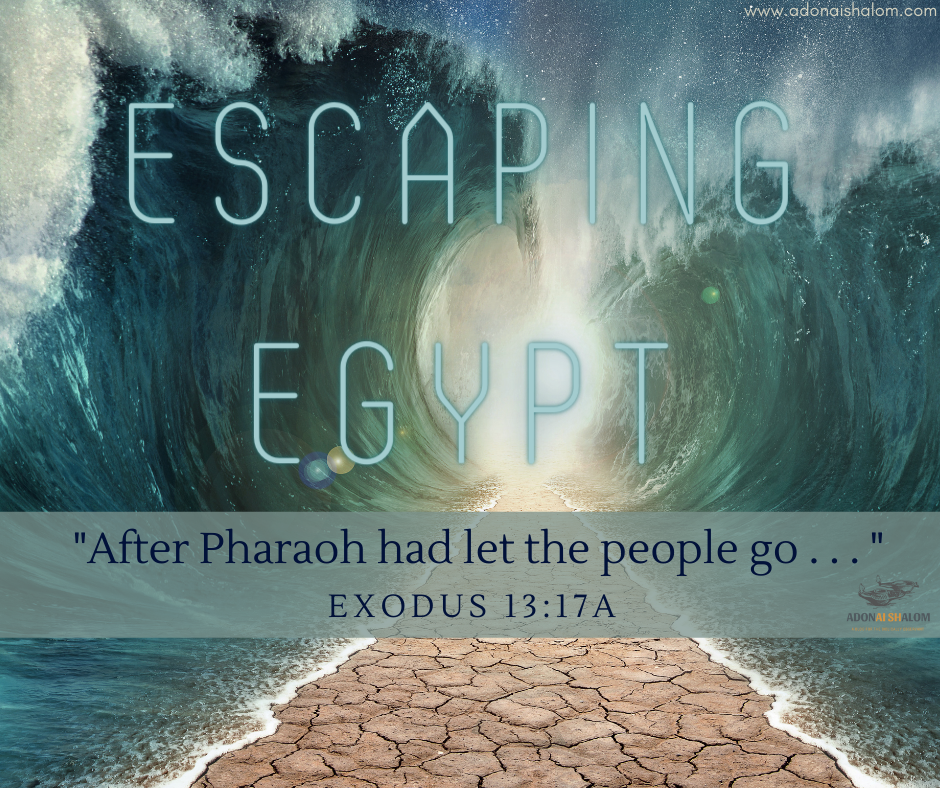 These words of Scripture are well-known to the children of the LORD because here the Word of God describes what happened “after Pharaoh had let the people go . . .” (Ex.13:17a).

We know this book in English as “Exodus” precisely because of this very central event.

The oppression was over. No longer would the children of Israel (b’nei Yisra’el) be forced to build up Pharaoh’s dreams of towering monuments and elaborate buildings. Now they could build up the dream that had nearly been buried within them – a dream to live in freedom under the authority of their King, the King of kings, the God of Israel.

Adonai brought them out of Egypt and was wise in the way in which He led them to their next destination.

Leaving Egypt in faith or in fear? Probably a little bit of both!

Undoubtedly, some of the people of Israel would have been walking out of Egypt as though on eggshells, fearful that their previous masters would come and round them up to shackle them back into their previous enslavement. Their trepidation was not unfounded.

Surely the young ones would have tried to run ahead to get away as quickly as their youthfulness could carry them.

The elders who had the wisest of faith could walk with their heads held high – confident that the LORD had been with them all along, and would not fail them.

They would have sang their own songs just as Moshe (Moses) and Miryam (Miriam) sang and danced in the desert after the Red Sea Crossing.

The LORD’s faithfulness to His people to bring them out of Egypt and through tough times has inspired so many expressions of this truth.

Through many dangers, toils, and snares, I have already come.

Did you know that the author of “Amazing Grace,” John Newton, had been a slavemaster? A pharaoh of his time, it is said that Newton experienced a heart change and wrote that famous hymn.

How great a salvation that can change hearts so dramatically.

Things could have been different for the Pharaoh of Moses’ time, but he refused to repent and found his end at the bottom of the Red Sea.

The LORD has done something wondrous in your life! Be confident therefore that He who promised you is faithful (Hebrews 10:23). As Rabbi Sha’ul (Paul) wrote to the Philippians: “He who began a good work in you will carry it on to completion until the Day of Messiah Yeshua.”

It is easy to become fearful, especially when you sense the dangers in life.

The enemy wants to paralyze you with fear, but you can fight back.

Allow the Ruach haKodesh (the Holy Spirit) to endue you with His Holy power and help you to walk in the wisdom of faith.

How to handle enemy threats: remember the LORD alone is Sovereign

One road out of Egypt would have led the Israelites straight into the land of one of their enemies: the Philistines.

This passage begins with the concern from the LORD Himself that “. . . .The people might change their minds if they see war . . .” Exodus 13:17

You may be interested to observe that this parasha also ends with talk of war (Ex.17:8ff).

You can be living a very holy life, full of faith, and walking in the freedom granted to you by faith in G-D’s Son, Messiah Yeshua (Jesus), but that doesn’t mean you will not face difficulties.

The enemy will want to surround you, but the LORD Most High decides when He will allow this. The enemy isn’t all-powerful and he must submit to his limitations. Only ADONAI is All-Powerful. Only ADONAI is All-Merciful and All-Knowing, Ever-Present, and Worthy that we put our trust in HIM alone. He will give you the Victory over the enemy!

Are you easily disheartened?

Are you ready for the battles ahead?

The LORD in His Divine Sovereignty knew that many of the people would lose heart and return to their Egyptian taskmasters if they had to face war so soon. “. . . .The people might change their minds if they see war and return to Egypt.” Exodus 13:17

The people were armed (Ex.13:18) but they would not have to fight the Philistines, not yet. The LORD would help them navigate the Sinai Peninsula at a pace that they could handle (since many of them had a grumbling and quarreling habit). Surely the wandering in the wilderness would give them a stamina they would need once they did engage in future conflicts.

Israel faced attack by the Amalekites

It wasn’t long when the Israelites had to indeed fight. They were attacked at Rephidim by the Amalekites. Amalek was a grandson of Esau, and sadly the Amalekites became known as a defiant and evil people. They were so terrible toward Israel that Jewish tradition today equates Amalek to pure evil and darkness. If you know the story of Hadassah (Esther), Haman the evildoer was, you guessed it, an Amalekite. The Amalekites took advantage of the seeming weakness of the Israelites in the wilderness, but by the lifting of hands – Moshe’s in this case – Yehoshua (Joshua) under Moses’ leadership, led the Israelites to victory.

The Amalekites’ behavior was so wicked that ADONAI told Moshe, “Write this for a memorial in the book, and rehearse it in the hearing of Joshua, for I will utterly blot out the memory of the Amalekites from under heaven.” Ex.17:14

It was after this victory that Moshe (Moses) established an altar, naming it “The LORD is my banner:” “ADONAI NISSI.”

You may enjoy this song that speaks to the victories of the Exodus days. I particularly enjoy this song around Passover, but it is perfect for this parasha, and any time of year of course! His victories never fade, and every day, all year, He is worthy of our exaltation and adoration. He has delivered us and brought us a mighty long way!

If you are looking for another beautiful worship song that relates to this parasha, perhaps you will enjoy this lovely song which uses the words of Revelation 15 describing the song of Moses and the song of the Lamb.

And they are singing the song of Moses the servant of God and the song of the Lamb, saying, “Great and wonderful are Your deeds,  Adonai Elohei-Tzva’ot! Just and true are Your ways, O King of the nations! Who shall not fear and glorify Your name, O Lord? For You alone are Holy. All the nations shall come and worship before You, for Your righteous acts have been revealed!” Revelation 15:3-4

The LORD promises to deliver you

Perhaps you are going through a difficult time right now. Many of us are weary from the ongoing pandemic. Some have been affected by the economic uncertainties and the rising inflation. Perhaps someone you know or loved succumbed to Covid-19. You are not alone.

What ever Egypt you find yourself bound up in, the LORD has promised to deliver you. If you have placed your trust in Him, He will help you through this and bring you to a promised land in which you will find rest and comfort, and peace. Do not fear when the enemy tries to attack you from your blindspots.

Do not take a step out of Egypt only to go back into it.

Wait on the LORD and He will guide you safely across the seas of doubt, depression, anguish, illness, or financial ruin.

He will guide you safely across even when the winds of change or storms of fury attempt to sink your lifeboat. Have faith!

You might even graduate from walking through the waters to walking on the water!

Meet your Savior, Messiah Yeshua, Jesus, the One who calls us all to have enough faith to walk on the waters, keeping our eyes fixed on Him!

Has this message encouraged you today? Please leave a comment! We’d love for you to subscribe to our email newsletter and keep in touch with others who can encourage your walk with Messiah Yeshua!