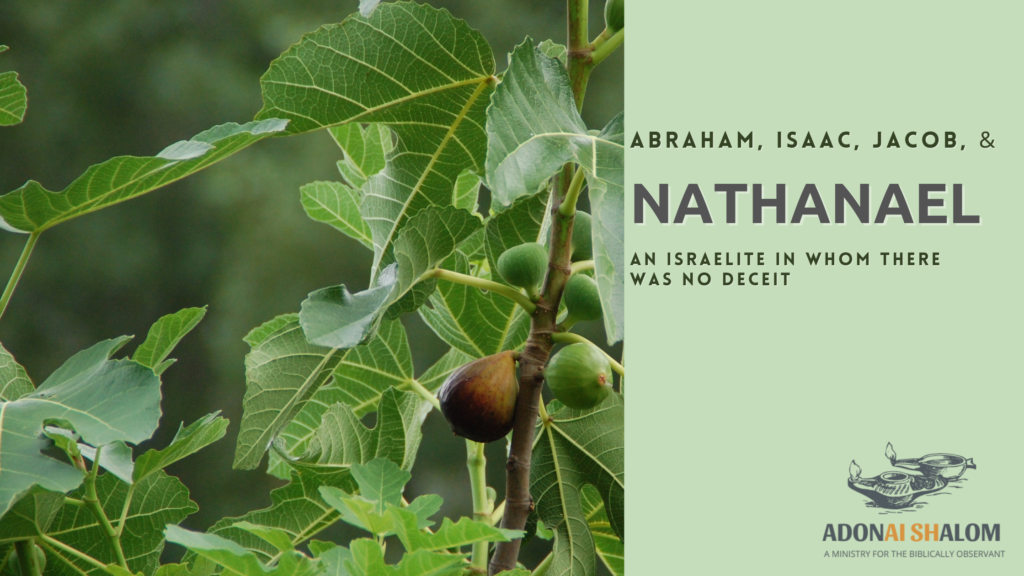 How does Jacob’s life and story relate to Nathanael in John 1? Find out in today’s Bible study!

Yaakov (Jacob) wasn’t the most honest guy in the Bible.

But he also wasn’t from the most “righteous” immediate family. In fact, we could describe his family (like so many) as quite dysfunctional.

You do know that our families of origin do have some influence on our behaviors as much as we wish that weren’t the case!

Now, we are not going to “excuse” Yaacov in this study.

Regardless of our upbringing, every single one of us must acknowledge our sinful behaviors and turn from those evil ways in repentance.

Yaacov’s behavior was not righteous nor godly, yet we will discover that despite his failings, God chose to use him.

So, just know this – no matter what, God can use you, too, my friend.

Twins with little to nothing in common

In modern language, we’d say Yaakov was a “homebody.”

Yaakov (Jacob) was a quiet guy who preferred the comforts and quiet of home much more than heading out looking to kill the night’s dinner.

His twin brother, Esav (Esau) on the other hand, was a total outdoorsman. He was “a man knowledgeable in hunting” (Genesis 25:27) so he was far more adventurous than Yaakov.

Did these brothers talk much?

Was there communication between these two seemingly polar opposites?

Esav would go out for long hours and I imagine Yaakov would spend quite a bit of time with their mother, Rivkah (Rebekah) because he stayed around the home.

This is the same Rivkah (Rebekah) who married Yitzhak (Isaac) when she was very young. In fact, she showed some signs of youthful immaturity based on her very quick acceptance of the marriage proposal and her falling off her camel when she saw Yitzhak for the first time! Yes, the culture was different so perhaps her eagerness to marry was perfectly normal, and yes, Yitzhak might’ve been just that good-looking to cause her to fall off her camel, but it is fairly safe to assume Rivkah was quite young.

Indeed, some scholars believe the “young woman” Rivkah (Genesis 24:57) would have been younger than about 13 years old at the time of their engagement.

So if we wanted to give Rivkah a benefit of the doubt, we could posit that she herself had not been parented long enough to know how to appropriately raise Esav and Yaacov (Esau and Jacob) in a godly manner.

We could assume Yitzhak (Isaac) and Rivkah (Rebekah) must’ve gotten married too young.

But if we are careful to study the Bible, we will realize this is not the case, at least not for Yitzhak (Isaac)!

Genesis 25:20 says Yitzhak (Isaac) was 40 years old when he finally took Rebekah to be his wife!

Now, we do not know the age of Rebekah at this point. It wouldn’t have been uncommon in the Middle Eastern culture for Yitzhak to have been quite a bit older than Rebekah, but nonetheless, it would seem that even Rebekah would have had had enough time to observe motherhood and learn how to be a faithful wife and mother.

Now, lest we let Yitzhak (Isaac) off the hook, the Bible reports that both of these parents showed favoritism.

“Now Isaac loved Esau because he had a taste for wild game, but Rebekah loved Jacob.” Genesis 25:28

It was a recipe for disaster.

Yaacov (Jacob) and his mother plotted a scheme to trick Yitzhak (Isaac) into blessing Yaacov.

Scripture says Esav came back exhausted one day from being out in the field (Genesis 25:29). Exhaustion coupled with hunger must’ve contributed to Esav not thinking straight.

Esav wasn’t savvy enough to realize how valuable his birthright was so he agreed to pledge it to Yaacov.

The red-haired twin agreed to give up his birthright in exchange for a bowl of red lentil soup.

Just a bowl of soup!

The man was hungry, but here is an extreme case of foolishness for giving into the stomach’s demands. He reasoned that he would die soon (Genesis 25:32) so the birthright would be useless to him.

Yaacov (Jacob) earned himself the reputation of “deceiver.” Some would like to soften this up a little and say he was merely a good negotiator or an astute businessman, but there is no denying that Yaacov acted with deception.

How is it then, that Yaacov is the one we remember?

How can it be that we talk about the God of Abraham, Isaac, and Jacob?

Why did God grant Yaacov (Jacob) a dream of a stairway to heaven? (Genesis 28:10ff)

Because God is merciful.

And He also honors words of blessing.

Yaacov had been blessed by Yitzhak, and there was no annulation.

If you have been studying B’rieshit/Genesis with us, you will recall that Abraham’s father, Terah, had reached a place named “Charan” and stayed there. It was a place of rest.

It was the same place where later Abram would hear the voice of God.

Now, it would be the same place Yaacov (Jacob) would dream of the stairway to heaven.

When the Bible talks about what is often translated as a “stairway” or “ladder,” think about it like a ziggurat. It was probably a multi-leveled tower common in that region at that time that was described by translators as a stairway.

In the dream, Yaacov (Jacob) saw angels going up and down and ADONAI, the One True God, standing on the top of the structure. The LORD spoke to him and promised to bless him.

Perhaps it was here that Yaacov genuinely converted? Maybe he repented of all his deceptiveness? We know that he confessed that ADONAI would be his God (Genesis 28:21).

Yaacov (Jacob) recognized that he was in the Presence of the Almighty and he felt he had seen the “gate of heaven.” (Genesis 28:17)

“So he was afraid and said, “How fearsome this place is! This is none other than the House of God—this must be the gate of heaven!” Genesis 28:17

In Genesis 35, God appeared to Jacob and told him he would have a new name: Israel.

An Israelite in whom there is no deceit

When God sent His Son, Messiah Yeshua (Jesus Christ) to minister on the earth, those who first realized that they had encountered the Messiah were filled with joy and enthusiasm.

Read what happened right after Yeshua (Jesus) called Philip to be a disciple:

“Philip finds Nathanael and tells him, “We’ve found the One that Moses in the Torah, and also the prophets, wrote about—Yeshua of Natzeret, the son of Joseph!” John 1:45, emphasis added

“Yeshua saw Nathanael coming toward Him. He said, “Look, a true Israelite! There’s nothing false in him.” John 1:47, TLV, emphasis added

I think the New King James Version will help us connect this a bit more easily:

“Jesus saw Nathanael coming toward Him, and said of him, “Behold, an Israelite indeed, in whom is no deceit!” John 1:47 NKJV, emphasis added

Do you see that our Savior was making a reference here to Yaacov (Jacob)?

Nathanael was being compared to Jacob, who had been renamed as Israel: here Nathanael is called a true Israelite – not a Yaacov (Jacob) who practices falsehoods.

Quite appropriately, Nathanael was surprised by what Yeshua (Jesus) said and asked Him, how did He know him? This is when Yeshua told him that he saw him under the fig tree even before Philip had gone to get him. (John 1:48)

What was Nathanael doing under the fig tree?

While it became more common after the destruction of the Second Temple, young Rabbinical students used to sit and study Torah under fig or olive trees. Nathanael may have simply been resting there, or he may have been studying the Word of God. Imagine if he had been reading about Yaacov just moments before Messiah makes the comparison between them!

Nathanael immediately recognized that he was encountering the very Son of God.

As though that is not enough, Yeshua (Jesus) promised that even more would be revealed to Nathanael. (John 1:50)

Yeshua (Jesus) made another allusion to Yaacov (Jacob): “And He said, “Amen, amen I tell you, you will see heaven opened and the angels of God going up and coming down on the Son of Man!” (John 1:51, emphasis added).

The promises made to Abraham, Isaac, and Jacob would be fulfilled. Nathanael would take part in God’s revelation to humanity that a Son had been given:

“For unto us a Child is born,
Unto us a Son is given;
And the government will be upon His shoulder.
And His name will be called
Wonderful, Counselor, Mighty God,
Everlasting Father, Prince of Peace.
Of the increase of His government and peace
There will be no end,
Upon the throne of David and over His kingdom,
To order it and establish it with judgment and justice
From that time forward, even forever.
The zeal of the Lord of hosts will perform this.”

There is a divine continuity in the Scriptures. Just as Nathanael knew to search the Scriptures and to put His faith in the King of Israel, so, too, we must do the same. When we recognize that what the Bible says is true, and we study and learn who God is and who is His Son, we see that His faithfulness has lasted throughout every generation, and we are now living in the last days. Our Messiah will soon return, and we must be ready to recognize Him and delight in Him! Philip and Nathanael exhibited such great enthusiasm and excitement because the Messiah was standing before them. Now, we have the Spirit of the Living God dwelling in us!

“Now because you are sons, God sent the Ruach [Spirit] of His Son into our hearts, who cries out, “Abba! Father!” Galatians 4:6

I encourage you today to seek the One who came to rescue and save the lost sheep of the house of Israel. Allow your eyes to be opened to the Scriptures and to the Messiah of whom the Scriptures speak. The King of all kings, Messiah Yeshua, Jesus the Christ, the Son of God has come. He has demonstrated His authority, His omniscience, and His omnipotence.

Will you be like Nathanael who so eagerly followed the LORD?

Will you reject the spirit of deception and choose honesty as a true member of the household of God?

Will you live in the promises given to the descendents of Abraham, Isaac, and Jacob?

John testified that “The Word became flesh and tabernacled [dwelt] among us. We looked upon His glory, the glory of the one and only from the Father, full of grace and truth.” John 1:14

Have you encountered this Savior? Have you looked upon His glory?

Perhaps you didn’t grow up in the most faith-filled or loving family. Don’t let that be a deterrent. God sees you where you are, whether you spend time under oak, pine, or fig trees; whether you live in the desert, the jungle, a large urban center or a farm; He is omnipresent – He is with you and He sent His Son to be Emmanuel – God with us.

Put your trust in Him today, and please, let us know about your decision! We love comments and would love to hear from you so we can pray for you. May the LORD use you, that all the nations would know that salvation has come!