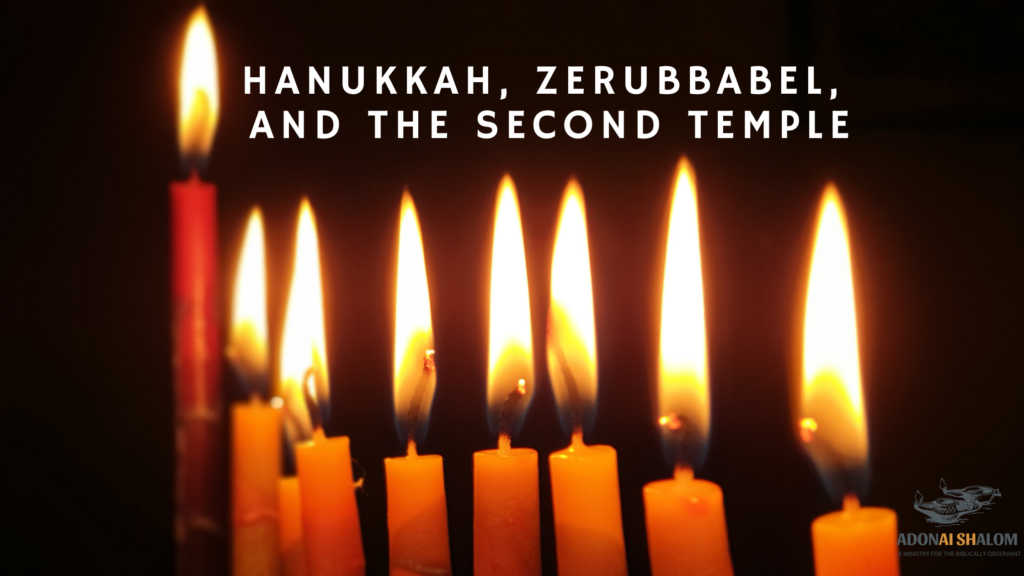 Some who have studied history have heard of Hanukkah’s hero, Judah (Judas) Maccabee, but are you familiar with how Zerubbabel fits into the story? Today we will take a look at the history and meaning of Hanukkah and discover how the LORD used Zerubbabel during the construction of the Second Temple.

The Festival of Lights and the Feast of Dedication

Hanukkah is known today as the Festival of Lights, and rightly so given that we celebrate the Light of the World – our Savior, Messiah Yeshua (Jesus Christ)!

But the more correct translation of the Hebrew term “Hanukkah” is “Dedication.” Hanukkah is the Feast of Dedication.

Most Christians do not realize that the Feast of Dedication = Hanukkah. It is the same thing.

Did you know that Hanukkah is mentioned in the New Testament?

“Now it was the Feast of Dedication in Jerusalem, and it was winter.” John 10:22, NKJV

In order to understand the New Testament in its correct context, it is imperative for believers to learn about the Feast of Dedication!

Our Savior was in the Second Temple during Hanukkah

“Then came Hanukkah; it was winter in Jerusalem. Yeshua was walking in the Temple around Solomon’s Colonnade.  Then the Judean leaders surrounded Him, saying, “How long will You hold us in suspense? If You are the Messiah, tell us outright!” Yeshua answered them, “I told you, but you don’t believe! The works I do in My Father’s name testify concerning Me.” John 10:22-25

Yeshua (Jesus) used the opportunity on Hanukkah to reveal that His sheep hear His voice and He gives them eternal life. (John 10:27-28).

Hanukkah is about Victory over Oppression and Insult

By being present during Hanukkah, Messiah Yeshua (Jesus) confirms to us the validity of the historical record. He shared in the joy of the Hanukkah miracle.

Hanukkah commemorates the victory of God’s people. Today, we know that through our Messiah Yeshua (Jesus) we have eternal victory, but we also celebrate the victories throughout history that have demonstrated the faithfulness of God to sustain His people.

He wanted to force assimilation to Hellenize the Jews so they would adopt the Greek culture and abandon YHVH.

He was such an obnoxious person that he took over the Temple and sacrificed a pig on God’s altar, an act considered highly offensive since the Jews do not eat pork.

To top it off, Antiochus Epiphanes had the audacity to set up a Zeus statue – right in the Temple.

Can you even imagine this?

Let’s modernize it a bit for the sake of understanding:

Imagine if your faith was illegal and the government took over the church you attend.

Imagine if the pulpit was replaced by a giant statue of a Hindu god like Krishna.

Do you have a communion table at church?

What if satanists came in and replaced the bread and wine or grape juice with the elements of witchcraft?

You would be outraged! Horrified! Something would have to be done, right?!

Well, the LORD used a man named Judah Maccabee to lead an uprising against Antiochus known as the Maccabean Revolt. As is so often the case, the Jewish army was hugely outnumbered, but when God is on your side good things happen.

Judah and his men won.

Though victory had been secured, the Temple of our LORD had been defiled.

It needed to be re-dedicated.

The process for consecrating the Temple required pure oil to burn in the Temple menorah, but there was only enough oil to last for one night.

But God is a God of miracles.

The oil that should have lasted only one night lasted for 8 whole nights.

The Temple was appropriately rededicated and the people were filled with joy.

Today, we use a special menorah for Hanukkah called a hanukkiah to remember the miracle.

Zerubbabel and the Second Temple Prophecies

This was the Second Temple, rebuilt under the leadership of Zerubbabel. It was of lesser magnitude and grandeur as the Temple of Solomon, but the Prophet Haggai records the LORD blessing Zerubbabel for his efforts:

The LORD also spoke to the Prophet Zechariah about this:

“Again the word of ADONAI came to me saying: “The hands of Zerubbabel have laid the foundation of this House. His hands will also finish it. Then you will know that ADONAI-TZVA’OT has sent me to you.” Zechariah 4:8-9

Haggai’s prophecy acknowledges that the people viewed the Second Temple as “nothing” compared to the first Temple. But the LORD encourages Zerubbabel to be strong and to persist in faith:

“In the seventh month, on the twenty-first of the month, the word of the LORD came by Haggai the prophet, saying:  “Speak now to Zerubbabel the son of Shealtiel, governor of Judah, and to Joshua the son of Jehozadak, the high priest, and to the remnant of the people, saying: ‘Who is left among you who saw this temple in its former glory? And how do you see it now? In comparison with it, is this not in your eyes as nothing?

Yet now be strong, Zerubbabel,’ says the LORD; ‘and be strong, Joshua, son of Jehozadak, the high priest; and be strong, all you people of the land,’ says the Lord, ‘and work; for I am with you,’ says the Lord of hosts. ‘According to the word that I covenanted with you when you came out of Egypt, so My Spirit remains among you; do not fear!’

Have you ever worked so hard on a project, but those around you viewed you with contempt? Maybe they thought your idea wouldn’t work or that you were putting too much effort into something that might not be worth it in the end?

The LORD promised that His Spirit would remain among the faithful and that He would fill the Temple with His Glory.

Yeshua (Jesus) later taught in that very Temple – fulfilling Haggai’s prophecy that the glory of this latter temple would be greater than the former!

Lastly, it was in the context of encouraging Zerubbabel that the LORD said the work would be done, not by might, nor by power, but by the power of the Spirit:

“This is the word of the LORD to Zerubbabel:
‘Not by might nor by power, but by My Spirit,’
Says the LORD of hosts.” Zechariah 4:6

The dedicating of our lives

This Hanukkah, remember all that the LORD has done!

He is the God of miracles and He can use that which we might consider small or insignificant for His Glory.

If you belong to Messiah Yeshua (Jesus Christ), your body is the Temple of His Holy Spirit (1 Corinthians 6:19).

Do you need a rededication? Sanctification (living and walking in holiness) is a process, and sometimes we need to get out the scrub brush and ask the LORD to cleanse us anew. Dedicate your life to Him! That is something I do over and over again because I love Him and I want to consistently be dedicated to Him and His mission.

Here’s a prayerful Hanukkah song about dedicating ourselves to the LORD:

He will use you for His Glory and He will work innumerable miracles in your life if you will trust Him and let your light shine!

1 thought on “Hanukkah, Zerubbabel, and the Second Temple”