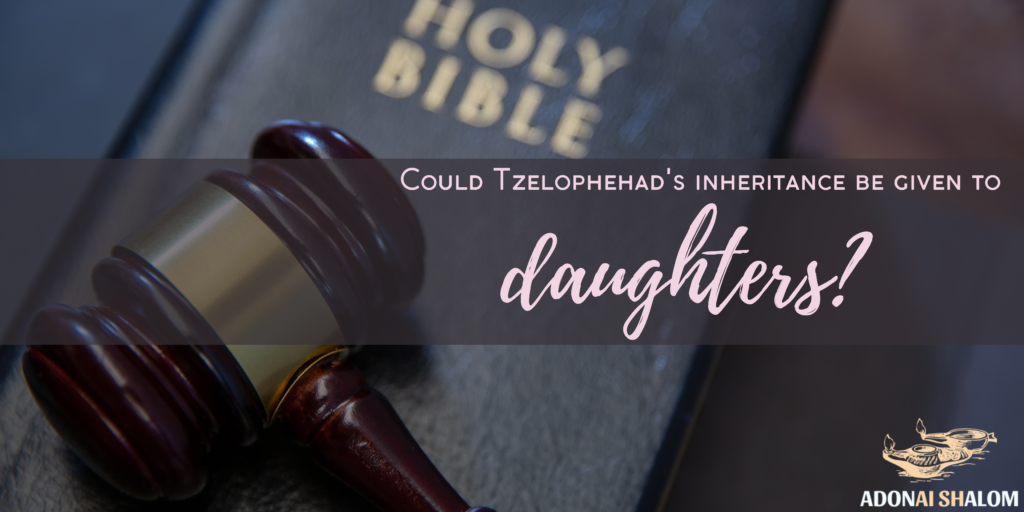 The Law had been given, but clarification was needed

One such instance occurred in Numbers (B’midbar) 27 when a man named Tzelophehad (commonly spelled, Zelophehad, in English translations) died in the wilderness.

He was survived by 5 daughters.

It appears Tzelophehad had been a decent man.

Nothing is said about his wife, so she may have died many years earlier.

Yet somehow Tzelophehad managed to raise up 5 thoughtful daughters:

Machlach‘s name refers to “sickness.” If she was the firstborn, as suggested by the name-order listing in the Bible, perhaps her mother struggled during childbirth. Noah‘s name is derived from a word meaning, “movement,” referring to “trembling” or “quivering.” Perhaps she was seen as “nervous” or “anxious.” Choglah’s name is a bit more obscure, probably meaning, “partridge” according to Strong’s Hebrew Concordance. Maybe she was a crier as an infant, because, according to the International Standard Bible Encyclopedia, partridges were known for their loud cries that attracted plenty of attention. Milcah is a form of Malchah, meaning “queen,” and Tirtzah describes a “favored” one or one in whom there is “delight.”

These women knew right from wrong and just from unjust. They were respectful of Moses and they concerned themselves with a legal matter, demonstrating that they also respected YHVH.

The legal precedence was such that sons received a father’s inheritance.

But Tzelophehad had no sons!

He did, however, have some independent thinkers!

His daughters concerned themselves with an issue of fairness, seeking justice, not only for themselves, but for the legacy of their father.

Tzelophehad was never part of Korah‘s clan. Tzelophehad’s daughters made a special point to ensure their father’s legacy would in no way be connected to Korah.

Tzelophehad had nothing to do with the rebellious uprising.

Read about Korah, the (wicked) Social Influencer of their day HERE

Machlah, Noah, Choglah, Milcah, and Tirzah appeared before Moses, Eleazar, and the princes of the entire Israelite assembly at the entrance to the Tent of Meeting.

No sickness or nervousness would keep them from walking in favor.

They did not seek attention for attention’s sake.

The 5 sisters had in them the confidence that they were daughters of Israel, queens in the royal kingdom of a holy nation blessed by the Almighty One. They were bound as sisters, and they made their petition together.

They posed this question to Moshe and Eleazar, and the leaders: “Why should our father’s name diminish from his family just because he had no son? Give to us property among our father’s brothers.” (Numbers 27:4)

A verdict from on high

Moses didn’t make a decision until he had consulted the Supreme Law-Giver, ADONAI. Moshe prayed and the LORD responded to him that Tzelophehad’s daughters were right:

They should be given the inheritance of their father, and the commandment would stand for all of Israel.

There was only one caveat (described in Numbers 36) which was that the daughters had to marry within their tribe.

These five brave women took a stand for their human rights. Some would say they remained limited due to the provision that they must marry within their clan, but culturally speaking, they were still granted significant freedom to marry whoever they wished within their tribal grouping.

Rabbi Johnathan Sacks, of blessed memory, delves deeper into the human rights discussion that arises from Numbers 27 in his article titled, Complexity of Human Rights. Of particular interest, the dichotomy of the individual rights justly pursued by the five daughters of Tzelophehad and the group or tribal rights that are also an important part of wholesome justice.

Today, most people are only focused on their individual rights, to the exclusion or disregard of the needs and rights of the wider society. This can lead to major distortions in appropriate social justice. The “me” culture of today forces wider society to adapt to outlandish policies demanded by at times defiant individuals, in a less-than-holy and unjust way.

The lesson from Numbers 27 is that when an individual pursues justice in a righteous and holy way, then their needs can and should be addressed, and the wider society will benefit from that individual situation.

Machlah, Noah, Choglah, Milcah, and Tirzah would marry within the tribe, for their own benefit, but also for the benefit of the nation of Israel.

Families come first, and this Scripture passage illustrates that.

The 5 daughters of Tzelophehad were blessed and heard because of their faithfulness and obedience, and the nation of Israel prospered, even to this day.

Have you ever found yourself in a situation in which you needed to stand for justice? Are you going through a circumstance right now in which you need to lean on the LORD’s favor to help you win your case? Do you have a prayer request? Leave a comment, or email us at [email protected] We would love to pray for you! Also, take a moment to subscribe to our email list so you can receive encouragement straight to your inbox! We promise not to overwhelm you with emails. Shalom!

4 thoughts on “Could Tzelophehad’s inheritance be given to daughters?”