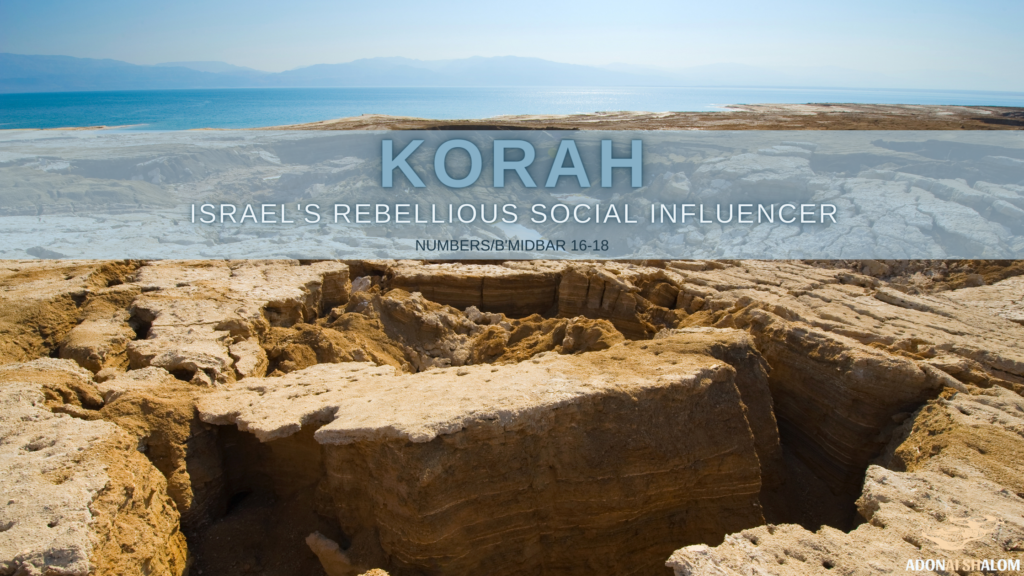 Grumbling and rebellion along for the journey

When the Israelites left Egypt, they were full of joy and the promise of a new future. They looked forward to the day when they would reach the Promised Land, the land flowing with milk and honey.

But the Promised Land was more than just special adamah אֲדָמָה (earth/ground). That Land was to be reflective of the spiritual posture of its inhabitants . . . and this generation was not up to par.

Grumblings, murmurings, and rebellion have a way of interfering with what could otherwise be a pleasant journey.

Ever try to take a fun road trip with grumpy children? So much for a pleasant journey.

And every congregation, large and small, has to deal with the occasional segment of dissenters.

Today, let’s look at Numbers 16, the account of Korach’s (Korah’s) rebellion against Moses and Aaron.

Korach’s Populist Plan for an Uprising

Korah (Korach) convinced 250 other Israelite men to join him in a populist plan for an uprising.

When trying to reason with Korah didn’t work, Moshe wanted to talk to Dathan and Abiram, but those two had fallen as low as Korah and refused to even have a discussion:

You see, sowers of dissent create distrust of leadership and cause disunity in the congregation.

Korah’s ambitions demonstrate that he wasn’t content with what he had been given and was convinced he could do a better job at being priest than those who were appointed to those positions.

Like Lucifer, Korah wanted a position that didn’t correspond to him. He wanted to be High Priest.

Maybe you have served on a ministry team or even pastored.

I’ve lost count of how many times we as congregational leaders have had to deal with the Korahs of our day.

How often we meet wolves in sheep’s clothing vying for power, unwilling to submit to wise counsel, questioning leadership, and ultimately trying to divide the flock.

It is a sad situation really, because these types of negative people are truly dealing with jealousy issues, anger, resentment, pride, and a whole host of sinful attitudes which they have never dealt with, repented from, or healed from.

These types of unhealthy individuals want to take down half the congregation – right down into that pit of defiance right along with them.

Just like not every sheep is a rebellious Korah, not every pastor is a humble Moses.

There can be a lot of toxic relationships, even in the church.

Sometimes pastors themselves are immature or hurt and treat their congregants inappropriately, or even abusively.

Pastors who do not have the backbone nor Moses-like prayer life to handle a challenge to their authority will often use an illustration like the account of Korah to attempt to scare rogue sheep into compliance.

Unfortunately, this can lead to spiritual abuse on a wider scale, as entire congregations have to endure harsh sermons warning them that if they don’t obey (the pastor or church leaders), the LORD might have a giant sinkhole take them out.

Recognize these types of unhealthy situations and make sure you and your family are being pastored with love and genuine care.

How true leaders respond in times of betrayal or unrest

Moses demonstrates how pastors and ministry leaders ought to respond in times of betrayal and unrest: he gets on his face before the LORD.

Later in the chapter, Aaron stands in the gap between the living and the dead to intercede.

Dathan and Abiram attempt to rewrite history to suit themselves.

These former slaves now claimed Egypt’s riches had been accessible to them as a land flowing with milk and honey.

These former slaves used Moses’ previous status as Prince of Egypt against him, to claim he lords over them.

Truly, Dathan and Abiram aren’t really just former slaves, they have bought into the insubordinate spirit of Korah.

They had become slaves to their pride.

The devil has a way of twisting history to make the Egypts in life sound so pleasant and deceive us right into temptation.

They sound like two deceived puppets spewing up Korah’s own complaints, which happen to be unrealistic expectations of Moses.

They are upset that Moses hasn’t brought them into the land ADONAI will bring them into, when HE decides. Dathan and Abiram whine that they haven’t been given their inheritance, but unlike the daughters of Tzelophehad who justly approach Moses regarding their inheritance, the Korah followers are bitter and impatient.

Today, we have social media “influencers.”

Korach was the social influencer in his day. He didn’t get YouTube awards or Facebook fans, but he had enough followers to cause a major disruption. That generation would never make it to the land of milk and honey.

Hebrews 3:19 “So we see that they could not enter in because of unbelief.”

Korah, Dathan, Abiram, and the rest of his gang had a choice between life and death, but their own hunger for ambition was met with a severe punishment from on high.

Rather than their hunger being satiated, these defiant individuals were swallowed alive by the earth and went straight into “she’ol.”

Be careful who you allow to influence you.

Korah’s fate and our lives today

If the LORD is going to cause the earth to swallow anyone up, let them go by themselves!

Don’t get dragged down right along with them.

What kind of media do you listen to?

What kind of social media do you participate in?

Make sure you are on the right side of history, so you can enjoy the provisions of milk and honey that are prepared for the faithful.

This portion of Scripture has been used to scare people, and we all benefit from a healthy reverence and fear of the LORD. But, rather than be consumed with terror, this passage should be seen as an encouragement to all who believe and follow our Messiah Yeshua (Jesus Christ).

God will deal with the rebellious ones.

Follow God’s Word and learn what it is He wants for you. Pray and stay faithful and He will bring you into His Promised Land.

During the same week of this Parashat in 2021, a giant sinkhole swallowed up some cars in Jerusalem! I’ll leave it up to you to decide if it was mere coincidence! 🙂

Here’s a link to a news article on it:

Are you a positive, godly influencer? How do you handle the Korahs in life? Please leave a comment, subscribe, or share with your friends! Be blessed, to be a blessing. Shalom!