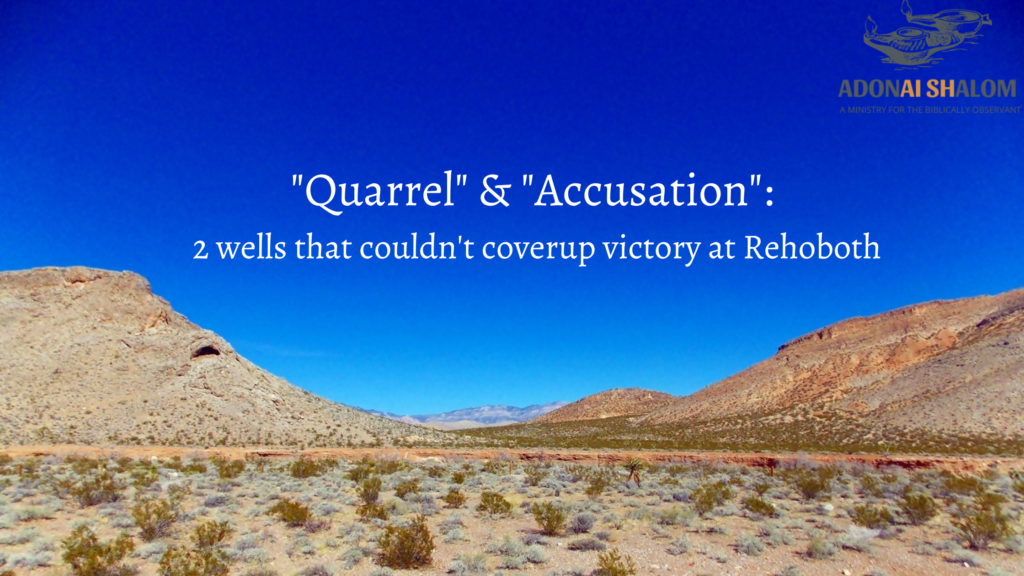 Our study begins today with the harsh realities of spiritual battle, but reminds us that victory is ours if we remain faithful to our LORD!

After Abraham had died, the Philistines covered over the wells he had dug in his lifetime, stopping them from providing any water. (Genesis 26:18).

Isn’t that how it goes sometimes?

The enemy is always ready to pounce.

A person works so very hard and so very diligently, but once they have either moved away or passed away, someone else comes along who wants to downplay or outright erase the memory of what that previous person did. This occurs because of a jealous spirit and selfish ambitions. In other cases, the enemy will devise a scheme and invent a coverup.

The enemy loves coverups, and there in the valley of Gerar, he literally inspired the Philistines to cover up the wells.

Sadly, I have seen this too often in ministry settings and if you have been hurt by this, I want you to be encouraged today because there is always a victory in the end. And it doesn’t only occur in churches. Families are often divided or torn apart by pettiness.

The Bible tells us to honor one another:

But all too often, rather than rejoicing in the wonderful, unique, God-given giftings of others, some church leaders find ways to discredit their peers, hiding behind seniority, experience, or education.

Yes… Sin finds its way in. Even in the church. Even in Bible-believing families.

So you have sowed and struggled and prayed.

The enemy preyed, but you prayed.

The enemy does his own preying.

The devil doesn’t want to see you well and prospering.

Abraham’s son Yitzhak (Isaac) was living into the promised blessing and became a wealthy and important man:

“Then Isaac sowed in that land and in that year reaped a hundredfold. ADONAI blessed him and the man became great and continued to become greater until he became very great. He acquired livestock of sheep and livestock of cattle, and numerous servants.” Genesis 26:12-14a, emphasis added

The Scriptures say, “Then the Philistines envied him.” Genesis 26:14b

The enemy of your soul will use any combination of envy, pride, arrogance, gossip, slander, distrust, anger, and jealousy to sow discord and disunity in families, businesses, and ministries.

Then the Philistines envied him. All the wells that his father’s servants had dug in the days of his father Abraham the Philistines stopped up and filled with dirt. So Abimelech said to Isaac, “Go away from us, for you are much more powerful than us.” Genesis 26:14b-16

Don’t give up or give in to the enemy’s way of doing things. Stay strong in the faith.

I am hopeful you have come out strong through the trials and the tests in life, but if you have ever taken a hard fall, be reminded today that God binds up the brokenhearted and heals every wound (Psalm 147:3). If you have been wounded in the battle, take the time you need to heal (this is very important!), and then get back up. Work toward restoration.

Is this you today?

Has the enemy been preying around you?

Have you been faithful to pray right against him?!

Restoring what the enemy tried to hide

Yitzhak (Isaac) wasn’t going to let his father’s legacy fade into the shadows.

“Then Isaac dug again the wells of water that had been dug in the days of his father Abraham—the Philistines had stopped them up after Abraham’s death. He gave them the same names that his father had given them.” Genesis 26:18

It wasn’t easy work in a desert land to dig a bunch of wells! But, the promise is sure:

“God, your God, will restore everything you lost…” Deuteronomy 30:3 MSG

If you remain faithful to the Mighty One of Israel, you will be able to go to the enemy’s camp and take back what he stole from you.

Living Water in the Desert

“Then Isaac’s servants dug in the valley and found a well of living water there.” Genesis 26:19

Doesn’t this point us right to the book of John? John testified quite a lot about God’s Living Water, and perhaps most relevantly to us in this study, he uses the geography of the land to situate the account of the Samaritan woman:

“So He comes to a Samaritan town called Shechem, near the plot of land that Jacob gave to his son Joseph. Now Jacob’s well was there. So Yeshua,[Jesus] exhausted from the journey, was sitting by the well. It was midday.” John 4:5-6, emphasis added.

Notice, the well at Shechem in Samaria is attributed to Jacob (Yakov) — Isaac’s son.

The wells that Yitzhak (Isaac) and his servants uncovered would bless his children including Esav and Yacov, and future generations. The well was still operational generations later when the Samaritan woman came to draw water. The ancient well provided the perfect setting for a woman in need to meet her Savior.

“Yeshua [Jesus] replied to her, “If you knew the gift of God, and who it is who is saying to you, ‘Give Me a drink,’ you would have asked Him, and He would have given you living water.” John 4:10

Be faithful in your generation

Yitzhak didn’t allow the good things accomplished in a past generation to just fade away under the dust.

He cared about that history.

He honored his father’s work.

But the work of restoration was met with some resistance.

When the well of living water was found in the valley of Gerar, the shepherds there started arguing with him.

The people at the Quarrel well said the water belonged to them.

And when he dug another well, he ended up naming it “Accusation,” [Sitnah] because the people kept on arguing with him over the water. (Genesis 26:21).

The enemy wants to do anything he can to prevent people from accessing the Living Water.

But if you persist and you are faithful, great things will open up before you.

When Yitzhak dug another well – away from those that were causing conflict – there was no one around to argue about it.

Where are they who accuse you?

“Then he moved from there and dug another well, and they did not quarrel over it. So he named it Wide Spaces and said, “Because now ADONAI has created wide spaces for us and we will be fruitful in the land.” Genesis 26:22

He appeared to him that night in BeerSheba and told Yitzhak (Isaac) that for the sake of His servant Abraham, he would bless and multiply him and his generations. (Genesis 26:23-24)

Yitzhak’s response was one of gratitude and worship. He immediately built an altar and called upon the Name of the LORD. He pitched a tent and his servants dug another well right there. (Genesis 26:25)

God will give the increase

The LORD gave wide spaces to Yitzhak: the green light (or green pastures!) that would ensure generational prosperity and testify to the goodness of the LORD in the lives of Abraham’s descendants.

Abraham and Isaac’s example can point us to Paul’s teaching to the apostolic generation:

When we realize that some of us are called to plant and others to water (or to find water by digging wells!), we realize that each of us has a special role in Gods’ Kingdom plan.

Along the way, the enemy will try to thwart the plan, but in the end, if you remain faithful to the God of Abraham, Isaac, and Jacob – you will thrive, prosper, and live to see the salvation of the LORD!

Has the enemy been at work trying to discourage or dissuade you? How have you seen hand of God working in your life to bring you to open spaces that will allow you to freely testify of the Good News and reflect God’s blessings and promises over you? Please leave a comment below, I love to hear from you! Shalom!