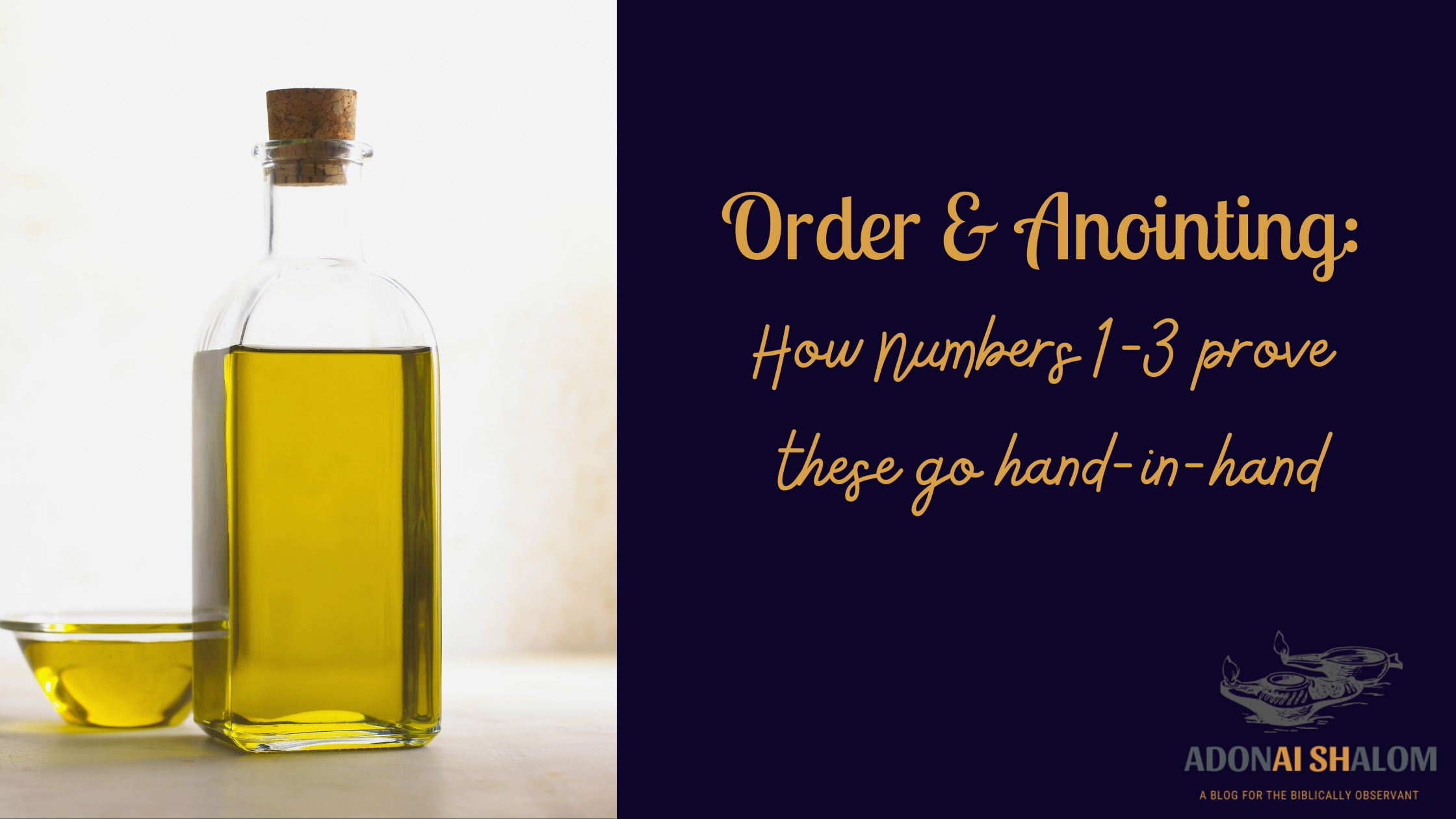 Numbers chapter 1 begins in the wilderness of Sinai. We are given the very specific date when the LORD spoke to Moses regarding a census.

It is a very orderly book, with very specific details and instructions. Truly, all of God’s Word and, especially the Torah, is well-ordered, and I hope you will be able to see how the divinely-established orderliness goes hand-in-hand with the anointing upon the Israelites.

There was to be a census of those men who could fight for Israel.

Simply, every Israelite son aged 20+ would have to serve in the Israelite army (Numbers 1:3).

It had been 2 years after the Exodus from Egypt. Specifically, the first day of the second month, 2 years later.

The encampment at Mount Sinai would have been taking shape as a full-fledged community meaning Israelite families and their assets would require protection as the community grew.

Men were looked to as protectors. They were numbered so that they could be assigned to their military divisions.

I am aware of feminist interpretations of this passage suggesting that God is somehow “unfair.” Feminists make the mistaken claim that the LORD “ignored” all the women because Numbers 1 only talks about men. Well, I grew up under feminist theology, so let me tell you plainly: it’s a bunch of nonsense. If God didn’t value women, He wouldn’t have gathered up the men to do the protecting: women would’ve been left to fend for themselves.

Men are naturally stronger. This doesn’t make women inferior, just different. We have different roles, that’s all. We do well to live in the order YHVH has established. We will experience the anointing of the LORD on our households when we live as He has prescribed.

Certainly, that would suggest a large number of women and children! What a blessing that so many men would be able to protect them.

Numbers 2 defines the expected order for each of the military groups.

I love how the Scriptures are very orderly.

The fact that the Scriptures are so orderly reflects the orderliness of our Heavenly Father.

He has everything well thought out, organized, and He cares about how each facet of how His creation functions.

Sometimes passages like these from Numbers seem tedious or irrelevant, but if you will slow down and look at the wider context, you will discover many treasures even in these words. Likewise, for what to do when the Scriptures make you squirm, check out this recent post on “The Value of Human Life“.

Numbers 3 gives greater depth to a theme introduced in Leviticus 1:47-51a regarding the roles of the Levites. Here is that passage:

Numbers 3 addresses the duties assigned to the Levites (and their families). See, the women weren’t neglected or ignored!

Before the specifics of the Levitical assignments are addressed, we find out in Numbers 3:2 about the tragic death of Aaron’s two oldest sons, Nadab and Abihu.

Numbers 1 and 2 had us thinking about the military, but these two young men didn’t die in battle.

They were Levites, so they weren’t fighting in the army.

Instead, Nadab and Abihu offered “unauthorized fire” before the LORD. (Numbers 3:4)

The New Living Translation (NLT) simplifies this to the “wrong kind of fire.” (Num.3:4)

Nadab and Abihu died before the presence of the LORD that day due to carelessness. They didn’t do their assigned task in the orderly manner required.

How often are we guilty of something similar?

The LORD had given specific instructions, but Nadab and Abihu somehow made a mistake that cost them their lives.

I am thankful for the LORD’s grace today! I am also thankful that ADONAI is a God of order (1 Corinthians 14:33). Order has to do with understanding and lack of confusion. He has redeemed us so we do not have to live confused, disordered, disoriented lives.

We must also be careful that we honor the Holy Spirit. When we worship, we must seek to be filled with the Holy Fire that comes from heaven alone and reverence His glorious presence.

Because Nadab and Abihu died, Aaron’s younger sons, Eleazar and Ithamar, served as priests under Aaron, their father (Numbers 3:4b).

Nadab and Abihu were replaced because the community still needed priestly leaders. May we learn from this tragedy to be faithful in all of our ways and to seek God’s guidance in every action we take. If we allow our lives to be ordered by the LORD, we will make right decisions and live in shalom.

Each Levite family was assigned different duties that ranged from caring for the implements of the sanctuary (such as the menorah, the Ark of the Covenant, and the altars) to the Tent of Meeting and its coverings to the care of the sanctuary itself.

Each family seems to have been anointed with a particular gifting, because as you read, you can observe that they were responsible for specific areas.

The Kohathites were responsible for “caring for the sanctuary.” (Numbers 3:28). They were assigned to care for the implements including the menorah, the Ark of the Covenant, and the altars. Perhaps they were anointed in metalworking, able to polish and repair any utensil as needed.

The Merarites held the responsibility to care for the structure of the Tabernacle. Their anointing was in engineering! They were to care for the posts and frames and crossbars, bases, pegs, and ropes.

Each clan had to follow the orderly instructions given by the LORD. If they didn’t, a job would go undone. A mistake could be made.

And we know from Nadab and Abihu that mistakes can prove instantly fatal.

If a non-Levite approached the Tabernacle area, the consequence was also death.

That’s another one of those verses that makes me say, “WHAT?”

But we must understand. The Tabernacle was set-up to teach us about the holiness of God. He is unapproachable without our Mediator (1 Timothy 2:5).

Had our Messiah never come, we would still bear the consequence of death. But praise be to our LORD who has sent His Son, Messiah Yeshua, (Jesus Christ) to save us from sin and death!

Throughout the Bible, we find all sorts of examples of people having received special anointing and giftings. The purpose of the anointing was so that a person would be divinely empowered or inspired to carry out a task that would be of blessing. The Spirit of the LORD rested on people for a time, and today, the Spirit of the LORD infills believers to accomplish the Great Commission!

God remains a God of order.

If we seek the blessings of the Holy Spirit (Ruach haKodesh), we must do so in an orderly manner, with a spirit of gentleness. He will fill us with His supernatural giftings if we seek to use those gifts to bless the Kingdom of God.

Perhaps there is no census of believers taken on tablets of stone or sheets of papyrus, and we haven’t all had to enlist for military service. But we are (as believers) members of the royal priesthood, and even the hair on our head has been numbered (Luke 12:7).

Today, I encourage you to seek to order your life, your every step, on the Biblical pattern God has established for a full and abundant life!

And I believe if you submit to His vital instructions and guidance, He will surely anoint you with His Holy Spirit to serve Him with success and joy!

Thanks so much for reading today! Please leave a comment below and subscribe to our monthly newsletter!