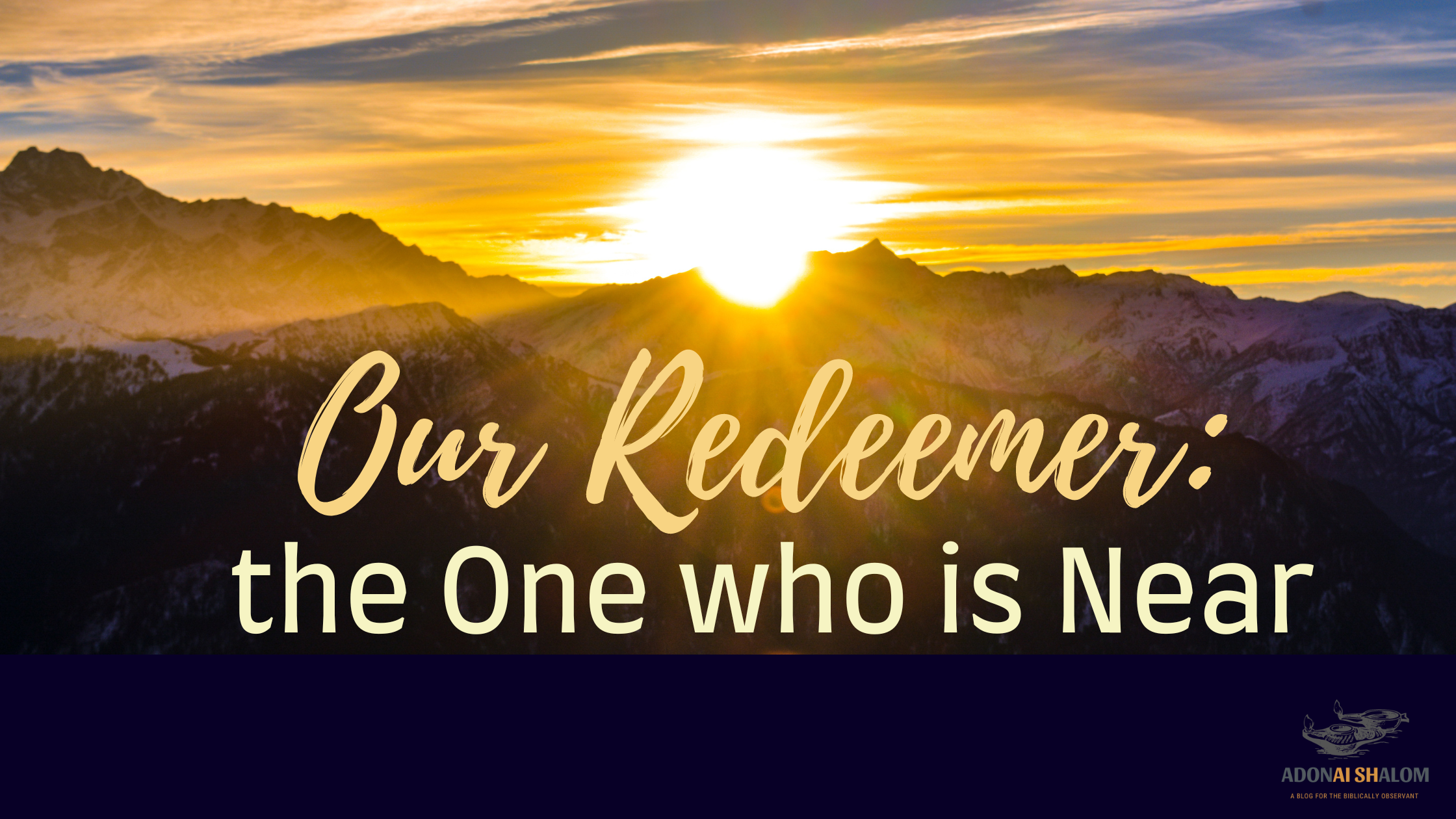 In Leviticus 25:25-28, we read a passage that quickly brings to mind Ruth and Boaz:

Are you at all familiar with this term? It is incredibly central to understanding redemption!

Yeshua (Jesus) is our relative. He is so closely related to us that He qualifies as our kinsman-redeemer.

In a sense, this is obvious, but if you really spend a moment to meditate on this fact, I am sure you will be touched by how truly glorious it is that our Savior is our relative.

Redemption was only possible if certain parameters were met.

The nearest kinsman had a choice. He could freely choose whether or not he wanted to redeem his brother. Ruth’s first-in-line kinsman redeemer actually rejected the proposition. Initially, he was interested, but once he realized he would have to marry Ruth and also take on the obligation to care for the widowed Naomi as well, he decided not to go through with the redemption.

He was concerned that he could endanger his inheritance, perhaps fearing things would be divided among a large family if he were to serve as redeemer. We do not know his reasons, but they may well have been financial. Boaz was probably wealthier and in a better position to take on the Redeemer-responsibility of a wife and mother-in-law.

The one in need of redemption is described in the Bible as “having become poor.”

You and I are spiritually bankrupt without the LORD, but He freely chose to redeem us out of our spiritual poverty.

“Becoming poor” means that we started out ok, but something, ie. the fall, happened to separate us from the LORD. If you have done something that makes you feel “less than” or completely “unworthy” or “unable” to “attain” salvation, know this: your poor condition doesn’t have to define your future.

Sin creeps in with the intent of robbing us of relationship with our Merciful Savior, but if you will confess your need and reject sin, you reject spiritual poverty. You can’t earn a place at His banqueting table, but you can accept His generous gift of mercy. He can set you free today from your fears, your anxiety, from anything that is between you and Him. The LORD wants to redeem you today!

The One who is Near

גֹֽאֲלֹו֙ הַקָּרֹ֣ב The full Hebrew description in Leviticus 25:25 for an individual to bring redemption to their “poor brother” is “go’el haqarob.”

“Kinsman” in Hebrew then could be expressed as one’s “near one.” Someone near and dear to you.

Forms of this same verb are used throughout the Psalms to express the nearness of God.

The LORD is near, the LORD is qarob – He is near to you when you call on Him in Truth.

He is near, qarob, as your next-of-kin. He is Elohim qarob, the God who is near.

You are part of the family of God, and He, your Savior, redeems you as your kinsman-redeemer.

Yeshua (Jesus) is your Brother and His Father is your Father, too.

Our Redeemer Lives and He is Near

Here again, a form of the term “qarob” is used to describe the spectacular Truth that our Redeemer God is near to us. Who else is so privileged to have God on their side? The LORD is with His nation, Israel; we are members of this holy nation. He not only protects and guides us, He is so near to us, nearer than our own breathing. He is not some distant god. He is not powerless, He is not uninterested in our future. He is deeply involved in our day-to-day lives because He cares for us so profoundly. And whenever we call upon His Name, He is listening. What a privilege!

Our Redeemer lives and He is near to us. Our slavery to sin is ended, our inheritance is restored, and we await our Bridegroom’s return.

Here are some encouraging songs about our Redeemer for you that you may enjoy listening to today!

We used to sing this song, “My Redeemer Lives” during praise time at a wonderful church I attended when I was first saved. It is a song sure to bring you some joy today!

“My Redeemer Lives” by Nicole C. Mullen is another encouraging song about our redemption.

“There is a Redeemer (Love has won)” by Darlene Zschech will usher you in to worship of our Great Redeemer!

You have an invitation to meet our Kinsman-Redeemer

He is near, and His return is likewise near.

He has invited you beyond gleaning in some far away fields. He invites you to draw near to Him because you are His beloved. He is the King of all kings, and He owns everything because He made everything. He will pour out the richness of His grace upon you and prosper you in your daily living. He will heal you and restore you, and yes, redeem you. He is your Father, and He wants to be in relationship with you, His precious child.

Will you accept His invitation today?

Will you draw near to Him and allow Him to bless you today?

If you have questions about just who is this God of Israel, please write to me. I would love to share more with you about our Messiah’s love. You can leave a comment below or send an email to [email protected] Subscribe to our newsletter to get encouragement sent straight to your inbox. If you already know the LORD, share a testimony about when you came to know your Redeemer to encourage others! Shalom!

9 thoughts on “Our Redeemer: the One who is Near”