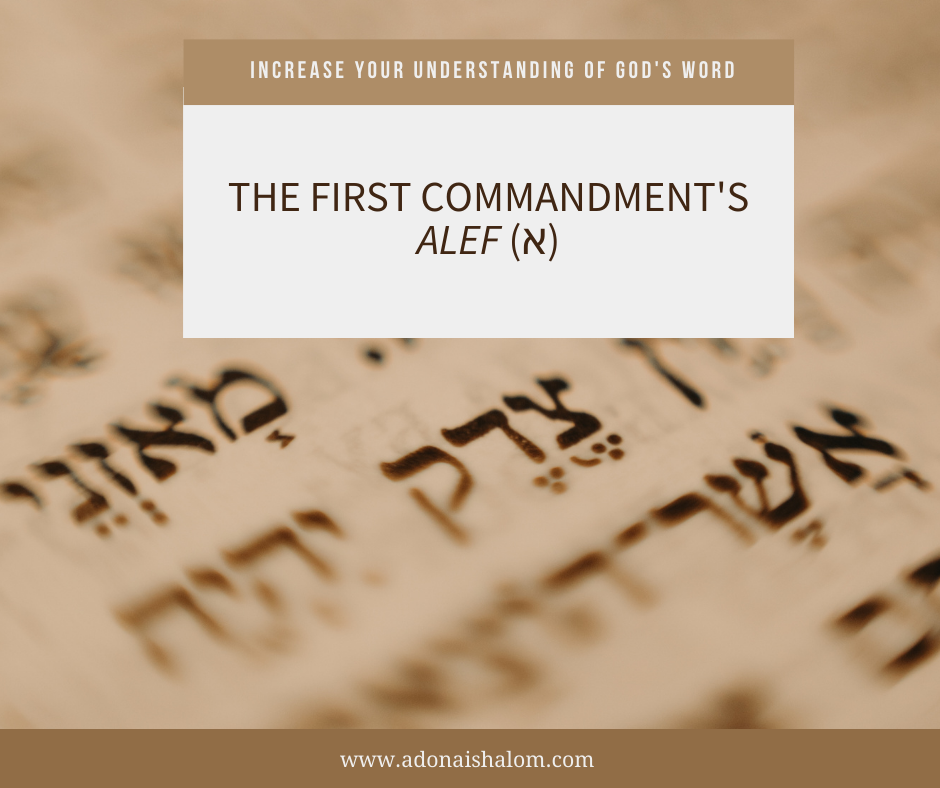 “I am ADONAI your God, who brought you out of the land of Egypt, out of the house of bondage. You shall have no other gods before Me.” Ex. 20:2

Learning just 1 Hebrew letter (at a time!) can greatly increase your understanding of God’s Word

The Hebrew language is very rich and full of depth of meaning. Sadly, for most native English speakers, Semitic languages like Hebrew are quite a challenge because the way the language functions is very different than English. The best way to begin is by mastering the Hebrew alphabet (the Alef-bet).

Many thoughtful believers do not realize that they are missing out on a depth of meaning in God’s Word when they sadly do not understand even the most basic Hebrew. Would you travel to a foreign country without even knowing how to say “Hello” in the language of the people there? We cannot fully understand the richness of our surroundings if we do not attempt to understand the language of Scripture. Do you know that Psalm 119 is an acrostic poem, starting with each one of the Hebrew letters? That is just one fairly common example of what I’m getting at.

It is even safe to say that there would probably be greater unity among believers if more Christians took the time to study and learn Hebrew. It is not the duty of the pastor alone to study! That said, leadership is indeed often part of the problem, as many pastors do not themselves feel comfortable with or have not attained a working knowledge of the Biblical languages, in stark contrast to the Rabbinic tradition that requires a thorough understanding of the Hebrew texts. Is mastery of a language required to preach the Gospel? Of course not. But the evangelical Christian community as a whole has done itself a disservice to diminish the importance of scholarship. If pastors do not encourage their flock to immerse themselves in study as well as prayer, the congregation will as a whole suffer because the average attendee will not understand the value nor experience it for themselves.

So if you are reading this blog post, perhaps you are one of the few who are “different.” 🙂 Does “chosen” sound better lol? You want something deeper. And you should go for it!

Step 1: Learning the 1st letter of the Hebrew Alphabet

To learn any foreign speech, you must start with the alphabet of the target language.

In regards to the Hebrew alphabet, let me assure you, if you take one letter at a time, you will learn gradually. Why not start at the beginning with Alef? Are you familiar with the Sound of Music? Starting at the very beginning is a very good place to start . . .

Take a moment to look at the letter Alef: א.

It can be noted that the Alef א is actually comprised of two Hebrew yuds, which are tiny little letters that look like this: ‘ separated by a diagonal vav: ו

Alef is granted standing as a very special member of the Hebrew alef-bet and for good reason. Tradition has held that Alef represents the Oneness of God. Greater depth of meaning can be seen as believers can immediately observe that Alef ultimately displays the Triune mystery of the Godhead denoted by the use of 3 distinct Hebrew letters to form the 1 Alef.

Yud happens to be a letter derived from the term “yad” which means “hand.” Vav means “spear” or a “tent peg.” Perhaps you will find the Gospel message hidden here:

One yud points up toward the heavens, the other yud points down to the earth

“For He himself is our peace, who has made the two groups one and has destroyed the barrier, the dividing wall of hostility.”

Halleluyah! A division existed, but the division was torn in two after the crucifixion of Messiah Yeshua.

Alef shows us possibility and perfection. Heaven and earth would come so very close together; indeed the yud demonstrates the presence of God in the world. Alef, the Oneness of God, manifest in Messiah Yeshua would break every barrier and shine forth the perfection of holiness. Adonai Echad. The Lord is One.

See? Just one letter. Quite a bit to unpack. If we visit the Scriptures, we might as well stay a while.

Exodus 20:2 begins with the letter Alef, the first letter of the Hebrew alef-bet (the word from which we arrive at alphabet). Alef is kind of like the English letter “A,” but has different properties due to the spiritual nature of the meaning and formation of each individual Hebrew letter. Alef also happens to be a numerical indicator of “10” in traditional Hebrew thought, which is significant given its place beginning the list of 10 Utterances.

The Ten Words, or Commandments, that God the Father gave to His people were intended to establish and maintain order in society, but also to demonstrate the unique position and covenant relationship He desired for Israel.

Returning to the identity of God as One, the fact that the decalogue begins with the Alef can serve as a reminder that He is first and foremost and there is no other.

The First Commandment: Have no other gods

The Lord God of Israel explicitly tells the people not to have any other gods. He alone is YHWH and the rest of the words found on the tablets would be meaningless if the people didn’t understand their Author, who is One.

The Author and Finisher of our faith, the Perfecter of our faith has left His divine fingerprints all over the beautiful pages of Scripture. The Alef found at the beginning of this set of commands is like a clue to us. He is with us and He will help us to live in accordance with His Word. He is merciful for those times when we fail. And His Word will never, ever fail.

“Yes, indeed! I tell you that until heaven and earth pass away, not so much as a yud or a stroke will pass from the Torah . . .”

He is the Alef-Tav (the Alpha and Omega), the Beginning and the End.

There is so much richness in Scripture, but if we do not take the time to challenge ourselves to learn something new, or something hard, we will miss out on a lot! Don’t let routine get the best of you. Start at the beginning and you will find yourself with a new skill, learning about the Word of God and the language of His people!

Dear reader, if you’d like to learn more about the God of Israel or get insights about the Scriptures right to your inbox, subscribe to our emails! We promise not to inundate you. May you be blessed to be a blessing.